Animal husbandry is the basic industry of the national economy. It is related to the effective supply of food, the agricultural ecological cycle, the continuous increase of farmers' income, the public health safety and the improvement of people's livelihood. By implementing the "beautiful animal husbandry ecological project" and highlighting the ecological cycle breeding, by 2020, the ecological level of animal husbandry in the province will be further improved, and the comprehensive utilization of all excreta will be realized. The number of live pigs reached more than 17 million, but at the same time, the fecal emissions also reached more than 40 million tons. The pattern of live pig breeding tends to be large-scale, and the concentration of the industry increases. The amount of feces in large-scale breeding farms is huge, and improper disposal will cause serious harm to the surrounding environment. 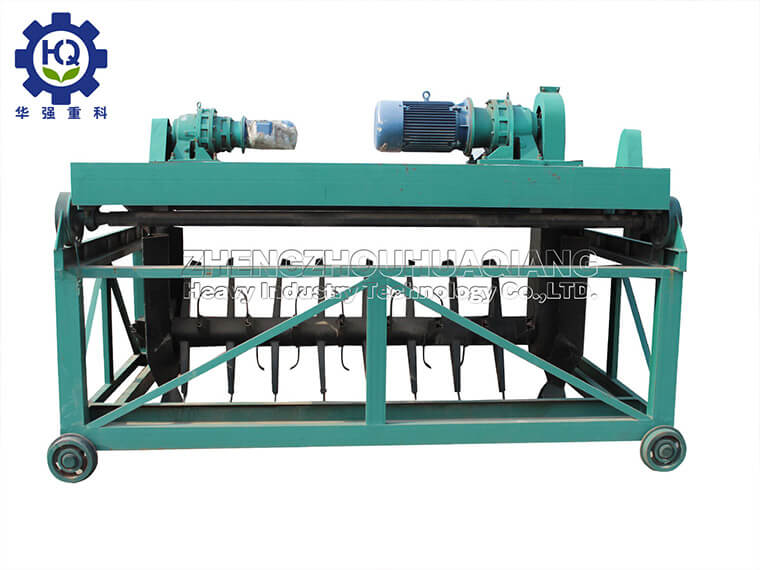 The organic manure dumping machine is a kind of mechanical equipment developed and produced based on Dynamic Composting. The early composting process is static composting, which is often converted into anaerobic fermentation due to insufficient oxygen supply, which will produce a large amount of odor such as hydrogen sulfide, and there is an explosion risk. The tipping machine can toss, stir and break the materials, so that the main raw materials and auxiliary materials are evenly mixed, so that the material pellets are fully contacted with the air, which is conducive to the aerobic fermentation of the materials and promotes the moisture emission of the materials.

The tipping device is the core component of the organic fertilizer tipping machine. Its function is to toss, mix and break materials to a certain thickness and ensure the formation of materials, which is conducive to the continuous and efficient fermentation of compost. The rotation of the tipping device and the running of the whole machine ensure the normal and efficient operation of the tipping machine. The main indicators of the throwing device are reflected in the speed of the knife roll, the width of the throwing, the rotating diameter, the structural parameters of the throwing knife and the arrangement and distribution on the knife roll. The rotation speed of the knife roller determines the effect of material turning and mixing; The rotation diameter determines the height of material turnover; The evenness and evenness of the material are mainly determined by the structural parameters of the throwing knife and its arrangement and distribution on the knife roller.